Martin & Scruff the Buzzard feature on the One Show

29 Apr Martin & Scruff the Buzzard feature on the One Show 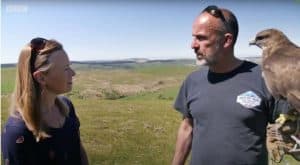 On a lighter note, todays blog is a look back at a lovely feature on the One Show from last year, featuring our very own Martin Cray.

Martin and Scruff the Buzzards story is a bit of a tear jerker so you might need to grab a tissue! You can see the video below and Martin has also taken the time to write up a short piece telling you the story in full.

I was making a series of films for BBC’s The One Show when a local farmer brought round a cardboard box. “I found it in the field, being beaten up by other birds” he told me.

I opened the box to find a young Buzzard, not fully fledged. Very unusual given that it was early October and most birds of prey are fully feathered and have flown the nest by July. I fed him up and kept him quiet for a couple of days with a view to releasing him again, but when I did, he just flopped into the undergrowth. So, I caught him up again and gave a brief medical examination, balancing the need to reveal any injuries with the need to minimise stress. Then I put him into a large specialised seclusion aviary designed to house wild or nervous birds of prey.

It’s worth saying at this point that I am a falconer and have been rearing, rehabbing and flying birds of prey for over 30 years. But I’d never seen anything like this before. He was unable to fly, still had the down associated with very young birds and his feathers had a strange curl to them. After a few weeks of isolation, I could see that he was not going to achieve full health if left to his own devices. So, I caught him up gave him a more thorough medical examination and diagnosed 2 parasite infections that needed treatment. I concluded that he’d need to spend the winter and spring in the seclusion aviary to better monitor him and allow him to moult out his deformed feathers. The trouble is that would mean he would neither form the muscles nor learn the skills needed to learn to fly. In the wild, most birds of prey are taught to hunt, and have their flying skills honed, by their parents. 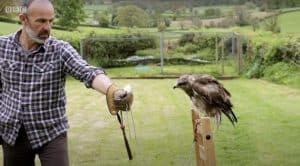 I decided I’d have to teach him myself. And luckily for Scruff, as he became known, I also have been flying paragliders for 30 years, and, even luckier, I’d trained a couple of birds to fly with me on the paraglider. All well and good; I’d get him better, get him fit, and then get him flying with me to learn the vital skills he’d need in the wild.

One problem. The One Show thought it would make a great story. So, I’d also have to film it.

The One Show sent a cameraman to help capture the landmarks in his development but other than those few days it was up to me to get it on film. That proved to be as big a challenge as getting the quite hopeless Buzzard to fly. I relied a lot on a Go pro on a pole to get selfie video diaries and a large amount of the training progress was filmed at high speed on my trusty Sony FS700. 240fps means those landmark moments don’t go by in a flash.

Once I’d finally sorted a second round of health issues, got Scruff really strong and conditioned to following me, it was time to try getting in the air with him. 3 on board go pros, the FS 700 manned by a volunteer on the ground meant we got enough material to convince The One Show to send a crew and the presenter along. 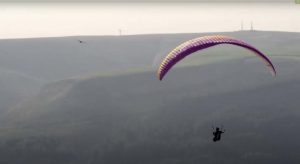 Then we had to wait for the weather and the presenter’s availability to coincide – never an easy job with UK weather!

On the day it began to look hopeless as the forecast was out by 180 degrees. Then just as everyone was getting just a bit impatient, the wind came on to the 3rd flying site that we’d driven to that day and we were able to capture the action in beautiful late afternoon light.

The result was surprising. I’ve never had such a reaction to a film I’ve made. I had grown men cursing me for making them get all emotional. And Scruff? He went on to live happily ever after. I fattened him up, waited for a good forecast, took off all the jesses and equipment I’d used for his training and let him fly off into the sunset – not a dry eye in the house.

You can watch the full feature here: